Looking back to 2002 with BMW’s SMG – Sequential Manual Gearbox 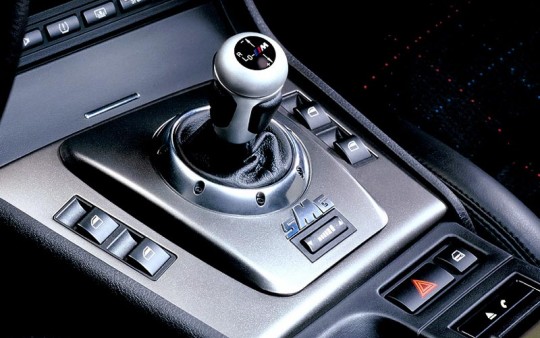 The Sequential M Gearbox is essentially a six-speed manual gearbox where the clutch and gearbox are operated electro-hydraulically by a computer in response to the driver pulling on two paddles behind the steering wheel, or by pushing a floor shifter forwards or backwards. There is no clutch pedal. As well, the SMG is capable of operating completely automatically if desired.

Die-hard manual transmission enthusiasts may find it hard to believe that an electronically-controlled transmission without a clutch pedal could be more satisfying than a traditional manual gearbox. I’m not going to say that it is better than a traditional manual gearbox, but there are some advantages which make it possible to drive the M3 more smoothly and safely at higher speeds, and add an element of excitement that wasn’t there before.

First, note that the SMG system is not an automatic transmission than can be shifted manually - like BMW’s Steptronic or Porsche’s Tiptronic - it is a manual transmission with a clutch, but without a clutch pedal, that can change gears by itself in response to driver input. BMW developed the SMG in close collaboration with Getrag and Sachs, and uses a similar technology in the Williams BMW Formula One racing cars.

After you get into the car, you’ll see a small orange LCD display in the instrument cluster that tells you what gear, or mode you are in. ‘R’ is for Reverse, ‘0′ is for neutral, ‘A’ is for automatic, and ‘S’ is for sequential. This display is not only small, but confusing because the automatic mode includes an ‘A’ and an ‘S’ symbol, while the sequential/manual mode has an ‘A’ symbol in a different font type. As well, I’m not sure why ‘0′ stands for Neutral. It took me a while to figure out what mode I was in.

The system also includes a ‘DriveLogic’ button just behind the gear lever that allows the driver to adjust the speed of shifts and the shift points using six different settings.

To start the M3 SMG, your foot must be on the brake and the shift lever in ‘0′ mode while the ignition is on. Turn the key, and the 333 horsepower inline 3.2 litre six cylinder engine roars to life, emitting a dull rumble from the M3’s quad tailpipes. The SMG can be changed between manual and automatic modes any time while the car is running simply by tapping the floor gear lever to the right. Tapping to the left will put it into Neutral.

Just behind the steering wheel are two large, flat ‘paddles’ which can be reached with your fingertips while holding the steering wheel in the ‘9 and 3′ or ‘10 and 2′ positions. To shift up, the driver pulls on the right ‘+’ paddle, and to shift down, the driver tugs on the left (-) paddle. Alternatively, the driver can shift up by pulling back on the floor gear lever, or change down gears by pushing forwards. (This is the opposite direction to that of some semi-automatic transmissions.)

The SMG DriveLogic system has six settings: the lowest setting starts the car off in second gear, shifts sooner, and goes into sixth gear more readily to save fuel - the highest setting starts off in first gear, revs the engine higher before shifting, and tends to stay in lower gears to keep the engine revving faster for more responsiveness. It’s also more aggressive when downshifting.

Let’s talk about the Automatic mode first. My experience, after driving the M3 around town in rush hour traffic, is that it’s easier to let the transmission shift automatically in this type of driving environment - even though there’s no clutch pedal. Under moderate acceleration in the Automatic mode in the lowest DriveLogic setting, the transmission shifts gears at about 2500 rpm, and shifts slowly - even slower than you might with a normal manual transmission. At the same acceleration rate but at a higher DriveLogic setting, the transmission will shift more quickly at higher revs, usually about 3500 revs. If you really put your foot into it, the shift points go even higher. When slowing down or when coasting down a grade, the SMG will automatically shift down gears, and when braking, the downshifts become more aggressive.

Compared to a regular automatic transmission, the SMG is more performance-oriented, but depending on the DriveLogic setting and your driving style, the shifts are generally not as smooth.

Further, if the driver chooses the highest DriveLogic setting and turns off the DSC (Dynamic Stability Control), the SMG shift times “match the sporting performance of a true race car,” reports BMW. In this situation, the driver can make use of what’s called the “acceleration assistant”. By pushing the gear lever forwards and keeping it in that position while stopped, and then pressing the gas pedal to the floor, the engine will rev to the “optimum” starting speed. The driver releases the gear lever, and the M3 accelerates “with optimally controlled slip”. BMW says this function is unique to the M3.

I wasn’t able to confirm whether the M3 SMG is faster in a straight line than the M3 with a standard six-speed manual transmission, but with the quicker shifts, I suspect it’s probably about a half second faster than the 5.5 seconds it takes for the M3 Coupe 6-speed to go from 0 to 100 km/h.

The speed of downshifting with the paddles varies with the DriveLogic setting as well: softer shifts at a lower DriveLogic setting, faster shifts at a higher setting. The most amazing thing is that the SMG system does its own double-clutching - that is, blipping the throttle to match engine speed to the transmission speed to make shifts smoother - when downshifting. And it does it much faster than any driver could do manually with a standard manual transmission. Observers who don’t know you have an SMG transmission will think you are a really, really good shifter.

Keeping both hands on the wheel

The ability to keep both your hands on the wheel is a definite advantage of the SMG system because it gives you greater steering control. However, there are some situations where it’s difficult to keep both hands on the wheel while shifting with the paddles. When accelerating from a standing stop while turning a 90 degree-plus turn, it’s necessary to change into second gear before the turn is completed, and it’s difficult to reach the paddle with the right hand at that severe steering angle. The same thing applies when negotiating sharp turns when shifting is necessary. In these situations, I found myself using the floor lever.

As the SMG is very similar to a manual transmission, the car tends to roll back when starting on a hill. To prevent this, a special function called the “climbing assistant” can be engaged in either manual or automatic modes for forward or reverse travel. All the driver needs to do is to depress the brake pedal and pull the paddle for a short period of time. When the brake is released again, the M3 is ready to drive away within two seconds without first rolling back.

The SMG has some safety features: if you slow to a stop without shifting down gears, the SMG will automatically shift down to first or second gear. However, if you forget to shift up when accelerating, the SMG will not automatically shift to the next gear (unlike many automatic/manual transmissions such as the Tiptronic). It will, however, prevent you from over-revving the M3’s very expensive motor.

On one occasion, I mistakenly pulled the left paddle instead of the right paddle, sending the engine up to its rev limiter. It takes a while to get used to which paddle upshifts and which paddle downshifts and which way the gear lever is pushed to upshift and downshift and in the excitement of spirited driving, mistakes can be made.

Overall, I found the SMG transmission has a distinct advantage over a regular manual gearbox in its speed of downshifting and upshifting and the secure feeling of being able to grip the steering wheel instead of fumbling around for the gear lever. Still, as I mentioned, tight turns make it difficult to operate the paddles. As well, drivers raised on the traditional push-in-the-clutch, pull-back-the-gear-lever, let-out-the-clutch will find it hard to get used to this new, simpler system. In a way, the SMG’s automation takes some of the fun out of shifting.