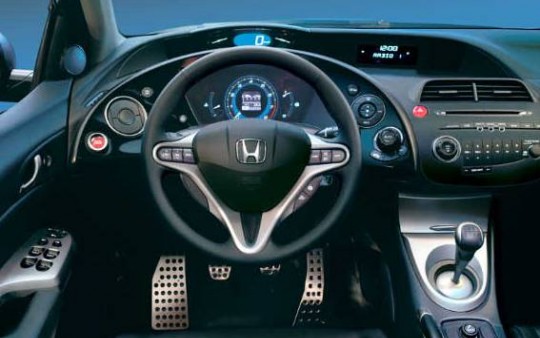 If pushed to name the best gear shift around at the moment, I''d probably go for Honda''s S2000. Best of all time may well be the old Civic Type-R. Those who were lucky enough to drive a Honda NSX will remember that wristy, short throw action with fondness. All of which goes to underline the fact that when it comes to making great manual gearboxes, Honda is virtually out there alone. There are some very good rivals around now with the Ford GT and even Volkswagen''''''''s latest Passat both boasting a sweet manual shift but Honda remain the masters. Strange then, that so many Civic buyers are opting to ignore all of that and opt for the affordably priced i-SHIFT gearbox.

Unless you''ve been living under a rock for the past decade or so, you''ll probably know that sequential manual gearboxes are now getting rather good. The first such units were, not to put too fine a point on it, spectacularly lousy and even the popular second generation units were none too clever. Lately, however, there have been some that make keen drivers ponder the wisdom of buying a conventional manual gearbox, Audi''s DSG being at the head of that particular field. BMW''s SMG has come a long way and Ferrari''s F1 box is a whole lot better than the first clutch-immolating clunker that appeared in the F355. To that list we can now add Honda''s i-SHIFT. Available on all petrol-engined models in the Civic line up, this is Honda''s first crack at a sequential manual gearbox. When executed well, these systems offer the plus points of both a normal manual and an automatic. In an ideal world, you''''''''d get the driver involvement, performance and fuel economy of a manual gearbox coupled with the convenience, rapid shifts and smoothness of an automatic unit. Unlike an automatic gearbox which features a power-sapping torque converter, a sequential manual instead uses hydraulic clutches to do the work normally carried out by your left leg.

"Many Civic buyers like an easy life. The i-SHIFT system delivers"

The Honda system utilises paddles behind the steering wheel rather than the less satisfactory buttons on the wheel face that some manufacturers opt for and switching between manual and `automatic'' modes is via button next to the gear shifter or via the paddles.

When you''''re in manual mode, the gear is indicated on the visual display next to the speedometer so it''''s easy to keep track of what ratio you''''re in. Software prevents you from being able to `buzz'''' the box by changing into first gear while zipping along the motorway for instance. Likewise, it will refuse to change up below 1,000rpm. It is effectively impossible to stall. Stop the car in fourth gear and the system will automatically shift back to first gear in either automatic or manual modes.

The i-SHIFT system also uses different shift maps depending on the driving conditions so when the Civic is being driven downhill, the system will shift down to add a little engine braking. Similarly, it won''''t shift down in the middle of a corner if there is any chance of upsetting the car''''s handling balance. Activate the paddles and you can shift manually even when the car is in automatic mode, to take advantage of a tempting looking corner or to provide an instant burst of acceleration. Otherwise things are much as with any petrol-engined Civic. Bucking the trend for successive Civics to be bigger and heavier than their predecessors, the latest car is significantly more compact than the seventh generation model. Overall length is 35mm less and the car stands lower by the same amount. In order to create a more dynamic stance, width has increased by 65mm. It''''s this change in dimensions that give the Civic its rather pugnacious demeanour.

Honda were late to the diesel market and now have one of the best diesels around. Likewise, it''''s taken them a while to develop a sequential manual gearbox but if projections are correct, the Civic will soon be the biggest selling car fitted with such a system. How times change.