Fast, direct, fully controllable and predictable–exactly the qualities desired in any “driver’s car” 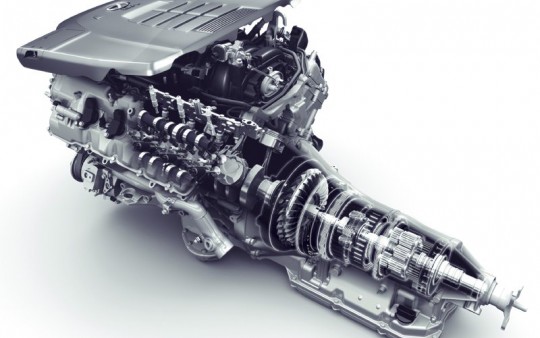 Conventional wisdom has long held that a good manual transmission is always faster and more fun than an automatic transmission: faster because it directly transfers power without the typical power loss of a torque converter, and more fun because it responds exactly to the driver’s commands with no delay. Fast, direct, fully controllable and predictable–exactly the qualities desired in any “driver’s car” and precisely those that describe the new Lexus IS F’s 8-Speed Sport Direct Shift transmission.

It’s an arrow through the heart of conventional wisdom.

But why go to the trouble of creating an automatic transmission that performs better and faster than a manual? After all, the simple yet effective manual transmission is held in high esteem by driving enthusiasts everywhere.

Engineers love a challenge and when the IS F Chief Engineer dared his staff to build a paradigm-changing high-performance car, the conventional automatic transmission was a ripe target. Why? The IS F would not meet their lofty goals — goals that included scintillating track performance — with anything less than a complete re-think of the gearbox.

Moving from Weakness to Strength

In the process of creating a maximum performance car, Lexus has done nothing less than turn what is typically thought to be a weakness into a solid advantage. To illustrate the point, let’s get right to the qualities that make it so:

These qualities add up to create a track-worthy, ultra-high performance transmission that works for you by responding to your demands the moment you want or need it to. And unlike other transmissions built for high performance duty, there is no pain required for your gain.

The most important quality in the development of the new gearbox was shift speed. Incredibly, the team looked at the world’s fastest shifting transmissions for reference and inspiration: Formula One. A typical F1 transmission upshift time is approx. 0.05 seconds, with virtually imperceptible lag. The IS F upshifts occur in approximately 0.1 seconds. The charts below put the remarkable shift speed of the IS F’s transmission in perspective. 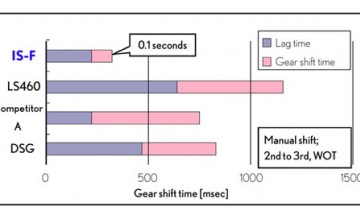 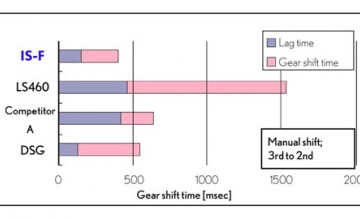 Begin with a Robust Design...

The transmission team started with a new 8-speed automatic transmission design from the Lexus LS 460. This may sound like physical overkill, but the IS F would have notably more power than the LS, so a robust design was required.

The cleverly designed gearbox is actually relatively light and uses a special planetary gear set that allows a more compact design. The whole unit weighs only 212 lbs, yet has more than enough torque capacity for the IS F’s 5.0-litre engine.

The team that designed and developed the transmission knew that they had to think without boundaries to achieve the type of performance on both road and track that skilled drivers demand. The surprising results are rooted in two key areas: shift/lockup clutch operation and shift control. It also doesn’t hurt to have eight speeds in the gear box.

The lockup clutch is not new to automatic transmissions, but the control strategy is. Traditional automatics have used the lockup clutch to make them more efficient by creating a direct power path between the engine and transmission. This is normally done in the upper gears and in low load operations to preserve smoothness while gaining fuel economy.

The IS F turns this idea on its head by employing lockup in all gears except first when in manual mode. This eliminates any power loss from torque converter from 2nd through 8th gear while preserving desirable torque multiplication in first gear for the acceleration you want. The result is a direct feel unlike any other automatic, and right now response to the throttle. This lockup scenario surely creates excessive shift shock, you say? The intentional result is much more in the “useful feedback” category than shock.

In order to create the virtually instant upshifts (in manual mode), Lexus engineers developed new methods to control the hydraulic pressure that actuates the transmission clutches. A high flow-rate linear solenoid is one of the key elements that work together with special computer programming to provide quick and precise control in concert with engine torque. The ability of the transmission to respond only to your commands yields a manual mode that is true to its name. It shifts only when you ask it to, and not when it thinks it should.

In addition, a modified manual mode is readily accessible without even touching the shift lever. When driving in “D,” one only needs to tap the downshift paddle once to move into the modified manual mode. In this mode, one can shift manually as desired; the system returns to automatic when the vehicle is stopped or driven at a constant speed for a time.