We take a look at a second original Automatic Transmission. 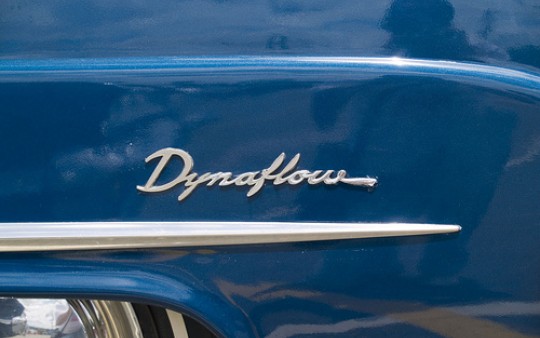 Buick''s entry into automatic transmissions actually began in the early 1920''s, when they began studying the principles of hydraulics and turbines.  This study led to the infinite variableconcept, which asserted that a transmission could operate with a large number of ratios and speeds in an uninterrupted sequence, rather than a definite number of fixed gear changes, as would be seen later in GMs Hydramatic.  The transmission Buick developed was called the IV or Roller. Testing in the early 30''s showed it to be an excellent unit, although not ready for production cars, due to parts failure after about 5,000 miles on the test tracks.  The project was put in limbo while a new semi-automatic was developed; a self-shiftingunit that was offered in 1938 Buick Specials.  It used regular gear shifting in First and Reverse, but automatic in Second and Third.  This unit was trouble-prone and was dropped for the 1939 model year.  The first real use of the Dynaflow torque converter driver was during WWII on the Hellcat tanks built by Buick for the war effort.

Work on the Dynaflow continued after the war, and by 1948 it was offered as an option on the Roadmasters.  It provided a smooth low-to-high range without the gear changes felt in GMs Hydramatic of the same period.  Dynaflow buyers complained of unusual noises and a feel of slipping while getting up to optimum driving speed, dubbing it the Dynaslush. Even with its early faults, more and more Buick owners opted for the Dynaflow, and by 1954, 85% of Buicks had them.

By definition, Dynaflow is a hydraulic torque converter in conjunction with an epicyclic 2-speed gear mounted behind it. The five basic components are the heart of Dynaflow Drive. They are contained in a sealed drum, completely filled with oil. The Pump is connected to the flywheel of the engine and turns with it. The Turbine fits inside the Pump, facing it. The Turbine is connected with the drive shaft, which turns the rear wheels.  As you speed up, the Pumps turning action throws a solid, cylindrical sheet of oil against the blades of the Turbine, causing it to revolve and move the wheels. In this manner, the unit acts like a fluid coupling (the motor can turn while the car is standing still, and oil, rather than a clutch, starts it moving). More than just a fluid coupling, however, Dynaflow is a torque converter; it multiplies the turning effort of the engine.

The Stators and Secondary Pump fit in between the Pump and the Turbine, and they redirect the oil as it flows from the Turbine back to the Pump. Oil flows from the Pump to the Turbine around the outside, then returns through the openings at the center of the Stators. The Stators are free to spin in one direction around the shaft on which they are mounted, through a free-wheeling arrangement, but they can not turn the opposite way. This means that during initial acceleration, when the engine and the Pump are turning faster than the Turbine and drive shaft, the Stators are locked in place, redirecting the returning oil into such channels as will multiply the thrust of it, giving the effect of first gear. As the car picks up speed, then each Stator in turn ceases to re-angle the flow of oil, floatingidly on the shaft because less conversion of the engines turning effect (torque) is needed. The need now is for a more direct transfer of power at a higher speed.

Upon reaching the free-wheeling stage of the Stators when cruising speed has been achieved and the driver eases off the throttle, the Pump and Turbine are turning at nearly the same speed--approximately one revolution of the drive shaft for each revolution of the engine. When more power is needed, for passing, or for maintaining speed on a hill, all that is required is to press harder on the throttle. As the engine speeds up to a point where the Pump is turning faster than the Turbine, the Stators lock up again, redirecting the flow of oil to convert its speed into extra torque. All this means that you now have an infinite number of gear ratios and you don''t have to select them, since the proper degree of torque multiplication is always in operation automatically. This self-adjustment is controlled by the difference in speeds between the Pump and the Turbine, and by the resulting difference in oil velocity upon the Stators. The epicyclic gear provides Reverse.

In 1953, Buick improved the original Dynaflow design with their new Twin Turbine. This incorporated two turbines but only one Stator, resulting in better performance and a feel of more direct power getting to the rear wheels. In 1955, variable-pitch Stators were developed, giving improved flexibility. The final major change to the Dynaflow was in 1957, with the Triple Turbine, or Flight Pitch. It was similar in theory to the Twin Turbine, but provided a new Grange, which gave a safe descent of grades by restraining the engines RPMs. Another difference was that the while the Twin Turbine could be push-started, the Flight Pitch could not. The most important feature of the new transmission was its 5-element torque converter, in combination with two planetary gear sets, consisting of an engine driver Pump, three Turbines and the Stator. The shift quadrant on the first series and on the Twin Turbine is PNDLR and the Triple Turbine shift quadrant is PRNDG, G being Grade Range.