In this article, we will look at the three common types of holding devices for planetary gear sets. Each having their own distinct advantages. 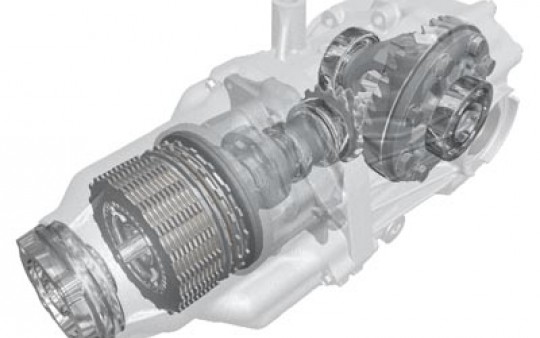 There are three types of holding devices used in the planetary gear set. Each type has its specific design advantage. They are:

The multiplate clutch and the multiplate brake are the most common of the three types of holding devices. They are versatile and can be easily modified by removing or including more friction discs. The brake band takes very little space in the cavity of the transmission housing and has a large surface area to create strong holding forces. One way clutches are small in size and release and apply quickly, giving good response for upshifts and downshifts.

The multiplate clutch connects two rotating components of the planetary gear set. The two multiplate clutches are the forward clutch and the direct / reverse clutch. Each is made up of a clutch drum which is splined to accept the input shaft and turning torque from the engine. The drum also provides the bore for the clutch piston. Because this assembly rotates while the vehicle is in motion, it presents a unique challenge to ensure fluid under pressure reaches the clutch and holds the clutch engaged for thousands of kilometers.

The piston houses a seal on its inner diameter and on its outer diameter which seals the fluid which actuates to piston. A relief ball valve is housed in the piston body of the multiplate clutch. This valve has an important function in releasing hydraulic fluid pressure. When the clutch is released, some fluid still remains behind the piston. As the drum rotates, centrifugal force will force the fluid to the outside of the drum, which will try to apply the clutch. The relief ball valve is designed to release the fluid after pressure is released.

Hydraulic pressure actuates the piston and return springs return the piston to the rest position in the clutch drum when pressure is released. Friction discs are steel plates to which friction material is bonded. They are always located between two steel plates. The friction disc inner diameter is slotted to fit over the splines of the clutch hub.

There are two types of brakes, the Brake Band and the Multiplate Brake.

– is located around the outer circumference of the direct clutch drum. One end of this brake band is located to the transmission case with a pin, while the other end contacts the brake piston which is operated by hydraulic pressure.

When the pressurized fluid is drained from the cylinder, the piston and piston rod are pushed back by the force of the outer spring so the drum is released by the brake band.

– serves the same function as the brake band and is constructed in a similar manner to the multiplate clutch. It locks and holds a rotating component of the planetary gear set to the case of the transmission.

Hydraulic pressure actuates the piston and return springs return the piston to the rest position in the clutch drum when pressure is released. Friction discs are steel plates to which friction material is bonded. They are always located between two steel plates. The friction disc inner diameter is slotted to fit over the splines of the clutch hub, similar to the multiplate clutch, however, the steel plates spline to the transmission case, thus providing an anchor.

A one way clutch is a holding device which requires no seals or hydraulic pressure to apply. They are either a roller clutch or sprag clutch. Both operate in a way that they rely on wedging metal between two races.

A one way sprag clutch consists of a hub as an inner race and a drum, or outer race. The two races are separated by a number of sprags. The side view of the sprags below show four lobes. The two lobes labeled L1 are shorter than the distance between the two races then the lobes labeled L2. As a result, when the centre race turns clockwise, it causes the sprag to tilt an the short distance allows the race to turn. When the centre race turns clockwise, it tries to move the sprag so that the long distance is wedged against the outer race, causing the centre race to stop turning.