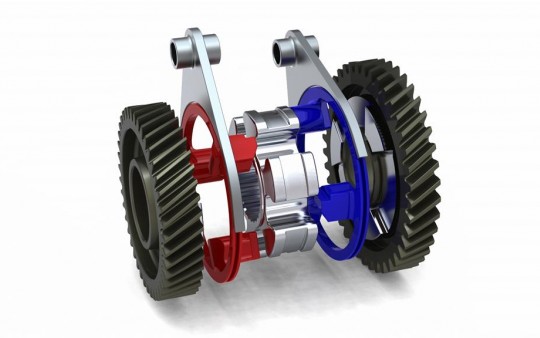 If you´ve ever owned a bicycle with more than one speed, it used a device called a derailleur for shifting. As you switched gears, the bicycle chain would move seamlessly between different diameter sprockets, an arrangement that could be capable of 15 forward speeds.

A newly designed type of automated manual transmission (AMT) that is touted as the world´s fastestshifting AMT has been developed by Zeroshift Ltd. in Milton Keynes, England, by a man named Bill Martin. The interesting thing about this transmission is that it works similarly to a bicycle derailleur. It also has the advantages over other designs of being cost effective to produce and being adaptable to any driveline: motorcycles, front- and real-wheel drive cars, including hybrids, and heavy trucks and buses. It also can weigh less than other transmissions.

By this time most of you are probably familiar with the dual-clutch Direct Shift Gearbox (DSG) transmission found in VWs and Audis here in the states. The concept of the DSG is to engage the oncoming speed gears while the transmission is still in the previous gear, and in milliseconds a wet clutch applies and the DSG is in the next gear.

What if an AMT could make that shift in zero seconds and do it seamlessly? The Zeroshift transmission can do exactly that by using electronically controlled actuators and an automated single dry clutch. These actuators also can be powered by either air or hydraulic pressure, which greatly expands the type of vehicle applications.

The secret blind the Zeroshift concept is the elimination synchro rings, which are replaced by „dog clutches“. These dog clutsches automatically upshift and downshift the transmission /Figure 1).

For example, when the transmission is in neutral, the first ring is engaged to prepare for forward movement while ring two takes up the backlash. Upshifts are made by ring two taking up forward movement while ring one takes up the backlash. In other words, this transmission design allows power on shifting because there is very litlle load on the shifting compotents.

The dog-clutch „bullets“ operate in sets of two opposing torque directions (figures 2 and 3). During a shift from one gear to another, the two bullet sets are both automatically engaged in the same direction as the torque that´s being applied, eliminating that loss of engine speed that occurs in other types of transmissions. This increases fuel economy, because no fuel is wasted, the engine continues to drive the wheel of the vehicle during shifting. 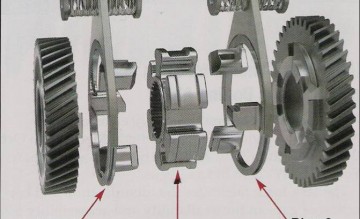 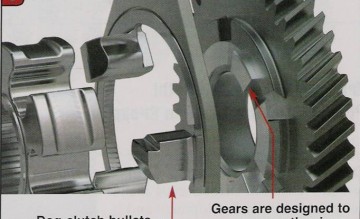