Nissan is preparing to launch an all-new line of light commercial vehicles for the North American market in 2010 with ZFs powerline. 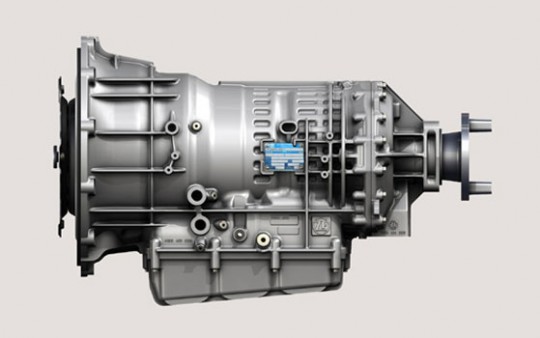 Nissan is preparing to launch an all-new line of light commercial vehicles for the North American market in 2010, including a full-size van and perhaps a heavy-duty pickup truck. While there’s still about a year to go before the first of these hits the streets, the transmission has already been put through its paces.

German driveline and chassis component supplier ZF has been contracted to build the six-speed gearbox for Nissan’s LCVs. “We’re supplying Nissan with our new PowerLine automatic transmission that’s made for use in pickup trucks to school buses,” said Paul Olexa, ZF’s vice president of driveline sales and marketing. “Where did it come from? We’ve designed it from our experience making commercial truck transmissions, all the way up to Class 8 trucks [gross vehicle weight rating more than 33,000 pounds]. But in the PowerLine we also use the same logic that’s in the six-speed transmissions we make for BMW. We think the PowerLine has the best combination of passenger-car comfort and work-truck durability.”

How do you test a transmission when the vehicle it will go in doesn’t exist yet? You put it in a comparable one. In this case, that’s a Ford Super Duty.

The actual transmission swap wasn’t as daunting as you might think, as ZF is very familiar with the Super Duty. The company builds the Super Duty’s old-school six-speed manual shifter that works with the same 6.4-liter diesel. Though the engine’s controls and software are optimized to work with the five-speed TorqShift, ZF left those bits completely stock.

The rest of the demo’s setup is complicated due to the nature of testing, tuning and evaluating the PowerLine’s shifting performance. To allow the 6.4-liter engine to “talk” to the six-speed transmission – and ZF to listen to the conversation – ZF inserted a layer of communications and monitoring gear between and around the motor and gearbox. The most noticeable side effect was a one-second delay between turning the key and the Power Stroke engine firing up, as the monitoring and communications systems oriented themselves for a new round of testing.

A stock F-450 has a maximum gross combined weight rating of 30,000 pounds, but ZF says the PowerLine transmission increases the truck’s GCWR to 33,000 pounds. The F-450’s unloaded curb weight is in the neighborhood of 8,800 pounds. For our drive, ZF dropped 2,770 pounds of steel into the Super Duty’s cargo box, so it weighed in at approximately 11,500 pounds.

Beginning testing in the PowerLine-equipped Super Duty, we were immediately impressed by how smooth and imperceptible most (but not all) of the upshifts were while accelerating. A mere 2,770 pounds isn’t much of a challenge for the Super Duty, but it’s enough to make you recognize it’s back there when driving with the standard five-speed automatic transmission. With the six-speed, we almost forgot about the load until we braked for stoplights and the extra mass reminded us it was there.

Reverse-to-forward shifts while backing up the truck were also very smooth, even when the truck still carried rearward momentum as we shifted into first gear.

A ZF-installed monitor over the dashboard’s center stack provided key real-time data as we drove, including throttle position (percent of wide-open throttle), engine torque, the transmission’s current gear, the target gear (for optimal performance and efficiency) and torque converter lock-up state (displayed on a scale of one to eight, where one was open for idling and eight was fully locked). The data displayed gave us a chance to map and validate technical performance to seat-of-the-pants feel.

Not all shifts and post-shift behaviors were clean. There were a few points where the engine and transmission calibrations were off; the rpm blipped up or a shift seemed slow. Olexa attributed these anomalies in the test truck to the Power Stroke “thinking” it was talking to the 5R110 instead of to the PowerLine. Despite the miscommunications, the transmission never hunted for a gear.

The 6.4-liter Power Stroke is rated at 350 horsepower and 650 pounds-feet of torque. That’s well within the specs of the PowerLine, which is engineered to cover a wide torque band, from 440 pounds-feet to 740 pounds-feet, depending on the application. It’s also designed to mate to either a gas or diesel engine.

The PowerLine has also been designed for improved fuel economy.

“The torque converter [used to transmit engine power to the truck’s transmission] has a turbine torsional damper,” Olexa said. “What this means is that we can lock up [the clutch] earlier [to quickly match engine and transmission speeds during acceleration] without getting engine vibration. Sometimes, if you lock too early, you’ll get engine shudder. The PowerLine locks up at just over 1,000 rpm, and all shifts up or down stay locked.”

“Based on our internal comparisons, the PowerLine is about 10 to 15 percent more efficient than [similar transmissions] on the market,” Olexa said.

The PowerLine’s final feature set hasn’t been determined yet, but it may offer some very innovative shift strategies beyond work-truck special modes like tow/haul or shift lockout.

“We can also use curve recognition, meaning the system takes input from the antilock brake system to detect the speed differential of the tires, so if you’re on a cloverleaf entering a ramp, I don’t want to upshift, I want to hold the gear so I can accelerate out of it,” Olexa said.

Olexa also said the PowerLine will be durable and in some cases almost maintenance-free during its anticipated hard-working life. The transmission oil only has to be changed every 75,000 miles, and its oil filter may not have to be changed at all during a “typical” 450,000-mile lifespan. Longer intervals between maintenance means work trucks stay out in the field longer and cost less to operate.

“We have a wealth of experience in severe duty cycles,” Olexa said. “The maintenance intervals reflect that.”

One other key feature of the ZF gearbox is its two power take-off ports, located on either side of the transmission, to enable work crews to power equipment directly off the vehicle’s diesel engine instead of having to bring separate generators.

The next step for ZF is to start testing the PowerLine in Nissan’s actual LCVs instead of a Ford proxy. Nissan has officially said that diesel-engine manufacturer Cummins will supply Nissan with two diesel engines for its work trucks. Cummins is a long-time supplier of diesel engines to Chrysler for use in Dodge Ram heavy-duty pickups. Cummins has also said it’s developing a new light-duty diesel engine slated for use in the light-duty Ram. This new diesel, which we expect will be a 5.0-liter V-8, is likely to be one of the engines Nissan pairs with the PowerLine when ZF starts transmission production at its plant in Gainesville, Ga.